After crossing the Rangitata river we immediately started going up Two Thumbs Track. We wanted make it as far as possible that day, to Royal Hut, right before Stag Saddle, so we would be in pole position to get across if the opportunity arose.

The terrain was more challenging than we anticipated. The section between Crooked Spur and Stone Hut took the best of us and we gave up, even though it was only 2 more hours to Royal Hut. We didn’t want to overdo it so that if it was clear the next morning we could hurry over he saddle. There were no signs of any storm approaching, the sky was perfectly clear. It was beautiful around and we were optimistic. Later in the evening Rod came, feeling less secure. We fetched water and collected wood, just in case.

During the night it poured, but it stopped a few hours before dawn. We had a first check at 6: it was calm, the stars and the moon were out, yet things seemed to look in the distance. I told PJ I wanted to wait until sunrise. When the first rays of sun start warming the sky is usually when things break out, and then we could see what was hanging over the mountains.

An hour later we rose again. The clearing was passing and a pitch black sky was approaching us fast. Just as the sun cast its first light on the mountains it started raining. The sky was on fire: a big rainbow stood in the sky behind the hut, the clouds were blood-red. A strong wind picked up and it didn’t take long for the rain to intensify. Minute by minute it grew stronger, until it sounded like someone was pouring huge buckets over the hut. We went back to sleep. 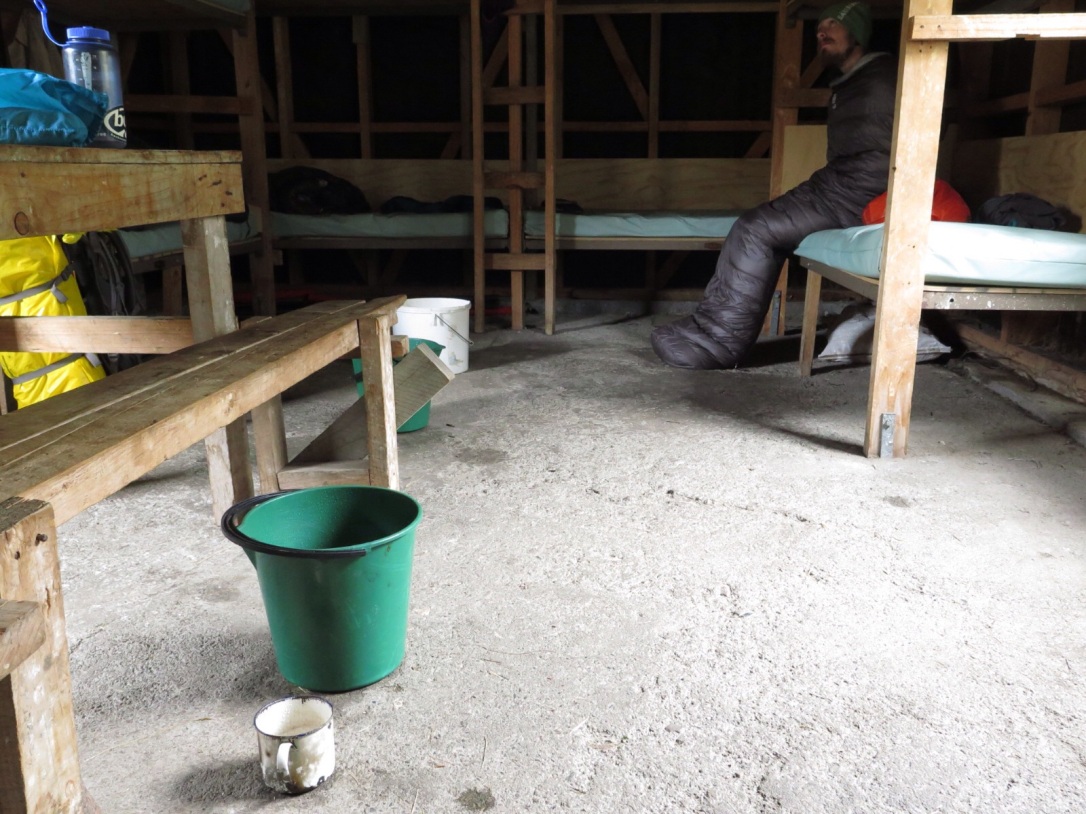 The hut wasn’t 100% waterproof and it rained down the chimney so our wood stayed where we put it. Nevertheless it was a welcome refuge. We kept an eye out for a clearing to get to Royal Hut. Every once in a while the sun peeped through, but would stay just long enough to allow us to run to the toilet and check on the stream. Dark clouds kept rolling over from across the Black Range. Suddenly at 2PM they all disappeared. We waited to see if it would hold. We also needed the water levels in the stream to drop for a safe passage to the next hut. There were several crossings of Bush Stream along the way, and from a nice creek it had swollen to twice its size: a turbulent stream with fast-flowing murky coloured waters.

The weather held, the water of the stream cleared and became less deep yet still swift. The first crossing were tricky, and we had to look for a good spot to get over. The stream calmed down further up. At least we made it to the next hut that day, and were ready to get across the saddle. It wasn’t much, but it was good for our spirit. But the next day was all the same. A second front blew in, and early in the morning gale winds howled and heavy rain was battering on the hut. So we stayed low, rationing our food and gas, which for once we had forgotten to fill up. It cleared up again late in the afternoon, but it was too late to start climbing. Pj voted to wait until the next day and I followed. Rod shared some of his gas with us for a hot chocolate, we shared our chocolate pudding. And so another evening came with no progress at all.

The wind turned south and it became cold. More rain came, and snow fell on higher altitudes. Ironically enough I had just been having another internal debate about sending my thermals and liner away, two items that were indispensable to keep me warm at that point. Even with them, a beanie and my softshell on it took ages to get warm inside the sleeping bag. Another night of uneasy sleep followed, anxiously listening to the rain and wind outside while the house mouse was running on our heads. But the situation remained unchanged. We were getting somewhat desperate. I really didn’t want to spend another night up in the high, cold hut. So when it seemed to be clearing up around 10 I voted for a gamble. Pj and I went for it, Rod stayed.

We hasted up Stag Saddle, Te Araroa’s highest point at 1925m. It was cold up there and the wind was biting, yet it was clear so we left the trail and went up on the ridge. The ridge line walk offers spectacular views over Lake Tekapo and the high peaks of Mount Cook National Park. It was great. As soon as we found a sheltered spot we sat down, took a long break and let the sun warm our limbs while looking at the unearthly view. Finally we were across, and a great weight fell off our shoulders. The reward couldn’t have been better: these few hours of ridge line walk were an absolute trail highlight. Sometimes you just gotta get the view.

We spent the night in cute Camp Stream Hut, the oldest hut we’ve seen on the way, built in 1898. In one long haul we walked down to Tekapo. It was a rough day of walking: both of us were tired, still cold inside, and starving. On the way we got offered a ride and declined. We will not yield now. No! We have come so far, hitched only small sections in storms in the north island, and haven’t missed a single meter of the south. No pulling back! If our stomachs and feet could speak at the time, they would have said: “you bloody idiots”. But we held on, it was painful, and in the evening we proudly sat in the YHA with a beer, a full stomach and a fantastic view.

We were exhausted, so we took a day off. The following morning we biked to Twizel, passing by gorgeous turquoise blue Lake Pukaki. It was my birthday, and it was a glorious day: a bike, a snack carrot, a bed, a shower and a delicious meal in the evening. Life could hardly have been better.

4 thoughts on “Caught in the storm – Two Thumbs Track”

There’s nothing quite like river swimming on a hot summer day. We found this beautiful swimming hole within walking distance from home 🙌
“Leisurely” Saturday afternoon paddle on the river ⛈. 📹 by Alec Forss #hallingdal #gol #nesbyen #paddling #padling #packrafting #thisispackrafting #alpackaraft #norway #norsksommer #thunderstorm #hail
Cuddling monsters
All eyes on the lady with the treats!
I’ve seen the sunset countless times from this spot in winter. Even after I ran up the mountain chased by a swarm of mosquitos the sunset did not disappoint during summer, either. I love our beautiful back yard 🌄
Bagheera enjoying the good life on his first tenting trip of the season 🏕. There is so much potential in this young pupper
Advertisements